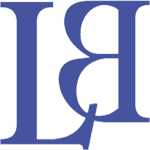 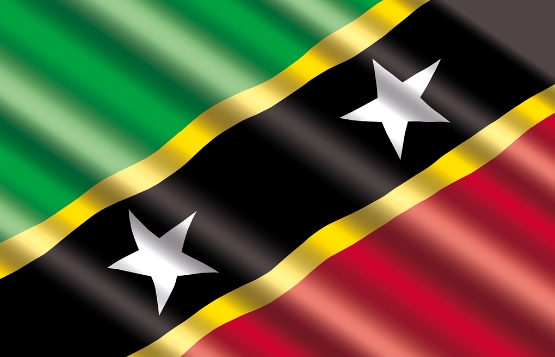 The Citizenship by Investment Programme

Some information about St. Kitts and Nevis

Saint Kitts and Nevis is an Eastern Caribbean state. It comprises two islands included in the Lesser Antilles. It has an area of 261 km² and a population of 55 thousand (2017).

The capital, Basseterre, is located on the island of Saint Kitts. Saint Kitts and Nevis is the smallest state in the Western Hemisphere, in terms of both land area and population.

It is a member state of the Commonwealth of Nations, an organization headed by the Monarch of the United Kingdom. It borders Antigua and Barbuda to the east, Montserrat to the south east, St Eustatius (a special municipality of the Netherlands) to the north west and Saint Barthélemy (an overseas collectivity of France) to the north. All the boundaries are maritime.

The total length of the coastline is 135 km.

Originally settled by the British in 1623, the Federation was granted, in 1967, the status of an associated state of the United Kingdom with internal autonomy, and then became an independent state in 1983. About a year later, in 1984, the country launched an economic second citizenship programme which allows to obtain a Saint Kitts and Nevis passport in return for investing in the economy of the Federation or a government-approved real estate development. 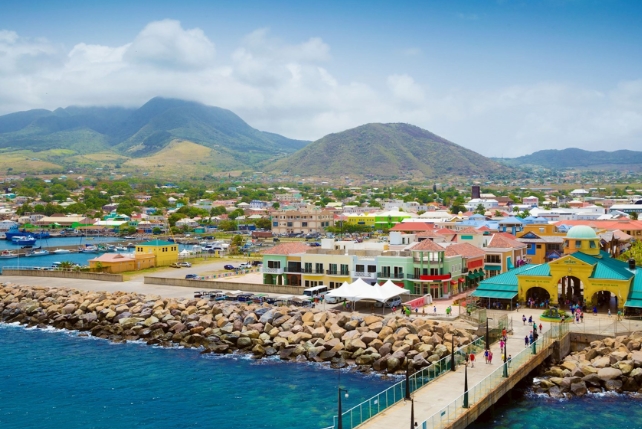 Saint Kitts and Nevis is one of our planet’s prime tax havens. Services offered in this offshore area include tax planning and asset management, company registration, establishment of trusts, offshore banking, etc. In addition, on the island of Nevis there is a
unique structure known as the multiform foundation, established to perform the most complex tax planning and asset management tasks.

Unlike several countries in offshore jurisdictions, Saint Kitts and Nevis has no plans to join the OECD ‘white list’ until 2025. British Virgin Islands, New Zealand and Cayman Islands have been on the list since 14 August 2009, Bermuda joined the relevant agreement on 1 October 2009, and Switzerland adopted the terms of the agreement on 1 January 2010.

The Federation of Saint Kitts and Nevis is a sovereign state within the Commonwealth since 19 September 1983. The Federation is based on the United Kingdom’s parliamentary democracy model. The Monarch of United Kingdom is the head of state, represented by the Governor-General. The Federation’s legal framework is based on the English common law, but the country’s corporate law incorporates the elements of both English and American law as well as the fundamentals of legislation from the US State of Delaware.

The Government holds executive powers and is headed by a Prime Minister — the leader of the elected party or majority coalition. The Cabinet is appointed by the Governor-General following a consultation with the Prime Minister. The Government is responsible to the Parliament. The UK Government remains in charge of defence and foreign affairs.

The First Citizenship By Investment Programme In The World St. Kitts and Nevis

In order to qualify, applicants must have no criminal records, be in good health, have high personal net worth and the capability to invest in a government-approved real estate development programme or make a financial contribution to the Sustainable Growth Fund (SGF). If all the requirements are met, passports are issued within approximately 90–120 days of submitting the application.

The Citizenship by Investment Programme of the Federation of Saint Kitts and Nevis was established in 1984 in accordance with Part II Section 3 (5) of the Saint Christopher and Nevis Citizenship Act, 1984, and is the longest existing citizenship-by-investment programme in the world. The Federation is a member of the Commonwealth of Nations, and its head of state is the Monarch of United Kingdom. It is also a healthy democracy based on the British parliamentary system.

The Citizenship by Investment Programme of the Federation of Saint Kitts and Nevis gives you and your family the opportunity to travel freely across the world with a visa-free entry to 130 countries. 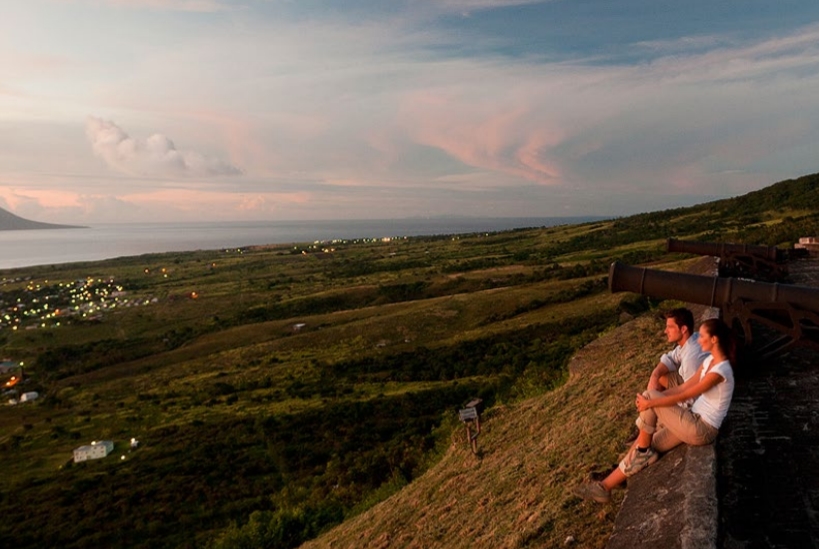 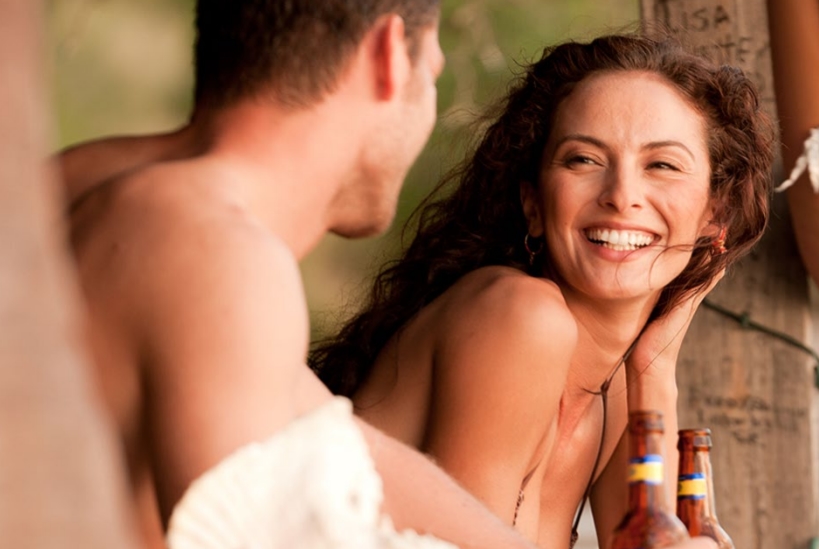 The Federation permits its citizens to have dual citizenship and, in accordance with its legislation, is not obliged to notify and does not notify other countries via official political channels that citizens of the said countries had been granted the citizenship of Saint Kitts and Nevis. The Caribbean state’s government is extremely committed to keeping the programme uncompromised: since 2011, after economic sanctions against Iran were introduced, applications from this country’s residents are no longer considered; applicants with the slightest hint of a criminal background undergo the most rigorous checks.

You don’t have to worry that a Saint Kitts and Nevis passport would have a bad reputation or that you would be sharing you citizenship status with shadowy characters.

Both the existing procedures and the regulatory framework of granting economic citizenship are certain to preclude such precedents. Citizens of Saint Kitts and Nevis can travel visa-free or get a visa stamp on arrival in 130 countries, including the UK, Schengen Area states and most of the Commonwealth member countries.

As a Commonwealth citizen, your children will be able to benefit from the UK’s youth mobility scheme, receiving preferential treatment when applying to colleges and universities in the United Kingdom.

With its exceptional tax regime and its currency pegged to the US Dollar, Saint Kitts and Nevis boasts a favourable environment for business development. Moreover, trade with Canada and the Caribbean countries is 100% tax free.

To qualify for citizenship via investing in real estate, the value of the acquired property must be a minimum of USD 200,000 and the development must be approved by the government. You are not allowed to sell on your investment during a 7-year period, but you can profit from short-term or long-term lease, which often amounts to 10% of the property’s value per annum.

Another way to obtain citizenship is to invest in the Sustainable Growth Fund in the amount of USD 150,000. This option does not provide for the return of dividends from your invested money.

Throughout almost the entire history of Saint Kitts and Nevis, sugar cane cultivation was
the country’s primary industry, but in the second half of the 20th century most of the
plantations and factories fell into decline and went bankrupt. In 2018, the Sustainable
Growth Fund (SGF) was established, which replaced the Sugar Industry Diversification
Foundation.
SGF focused on support and development of high-potential sectors of the economy
such as tourism, real estate, and financial services.

The country’s imports are around four times the size of its exports: Saint Kitts and Nevis
imports machinery, oil products, foodstuffs (the Federation’s agricultural sector caters
for no more than half of its demand), as well as manufactured goods. Saint Kitts and
Nevis’ primary economic partners are USA, Canada, Malaysia, UK, and Trinidad and
Tobago. 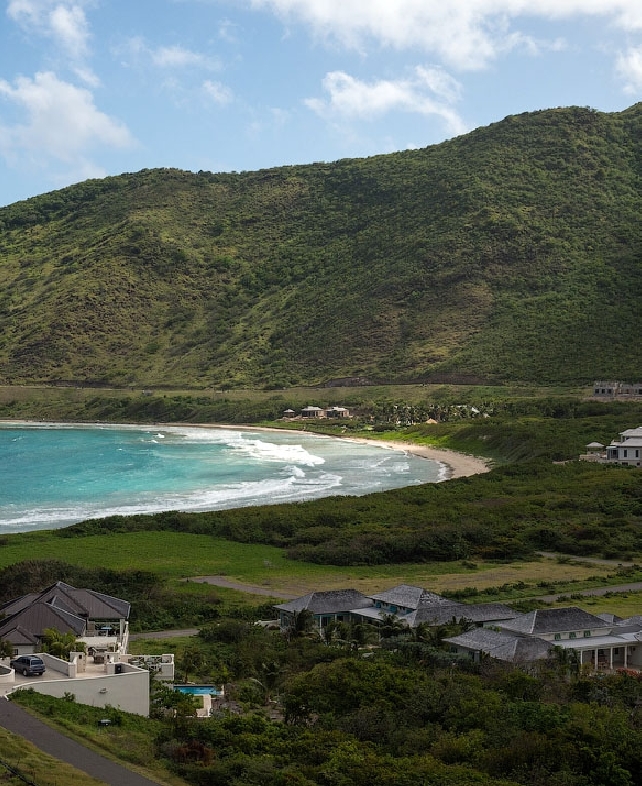 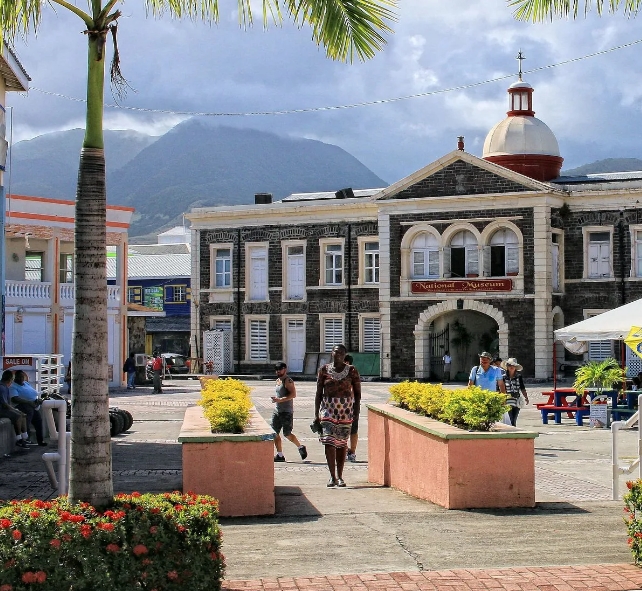 Tourism industry per se began emerging on the islands in the late 70’s and is currently growing at a colossal rate.

Unlike its geographical neighbours – Saint Martin, Antigua and St. Barts, Saint Kitts and Nevis has never been a mass tourism destination, therefore its huge natural potential, perfect climate and a multitude of tourism-related real estate developments make investing in the Federation’s economy a great option.

Judging from the tourism industry’s development, demand for holiday residences will remain high and maintain stable growth. In 2013, the first private aviation terminal in the
Caribbean was opened at the Saint Kitts Airport, and by 2015, the construction of the region’s largest yacht marina will be completed on the South Peninsula.

Availability and implementation of new ambitious projects such as Park Hyatt, Christophe Harbour and Kittian Hill are certain to make the Federation a tourism industry leader of the entire Caribbean region.

Saint Kitts and Nevis attracts investors due to its stable, and favourable for foreign capital, taxation system where there are no direct taxes.

The only exception is legal entities engaged in commercial activities on the territory of the Federation. The country’s budget revenues come mostly from indirect taxes such as import duties or VAT which is 10% in HoReCa and 17% in all other segments.

There is no income tax on Saint Kitts and Nevis, and neither is there any gift tax, inheritance or capital gains tax. The one exception is a 20% tax on profits from transactions involving assets located on the territory of the Federation for less than a year since their acquisition. The country’s laws allow to register businesses under various forms of incorporation, but the most popular option is that of an International Business Company (IBC) incorporated in Nevis. Like other offshore businesses, IBCs can’t engage in banking or trust activities, insurance or provision of their registered office’s address for other companies’ needs.

Companies operating on the territory of the Federation have no right to register as offshore businesses and must pay tax under the standard rate. Individuals and legal entities, with the exception of offshore companies, upon receiving payments from nonresidents, withhold 10% of income tax from the profits, administrative costs or expenses related to office maintenance, accounting, audit, royalties and rental of premises. Saint Kitts and Nevis has signed a double taxation treaty with the UK, Denmark, Norway, USA, Switzerland and Sweden, but offshore companies registered under the 1984 law on entrepreneurial activity are not subject to these treaties. 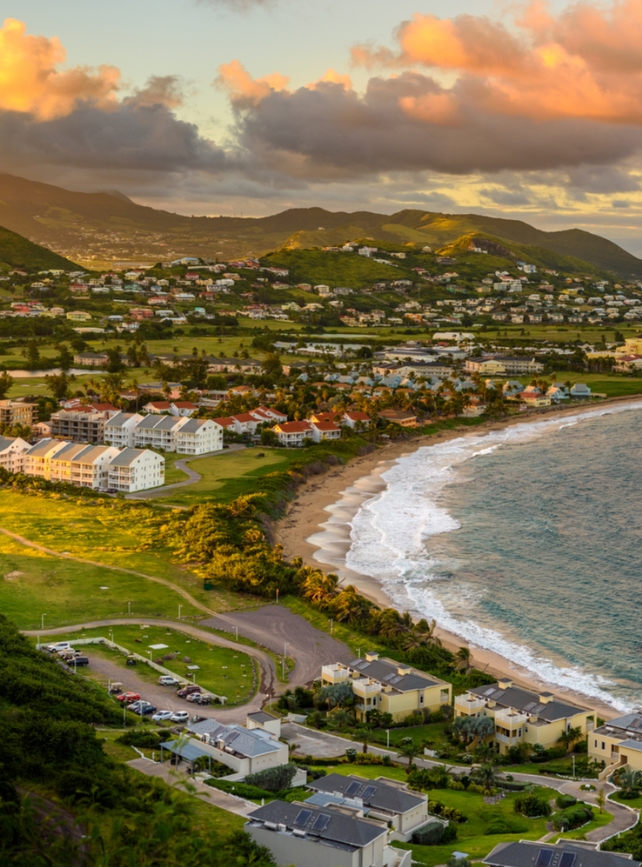 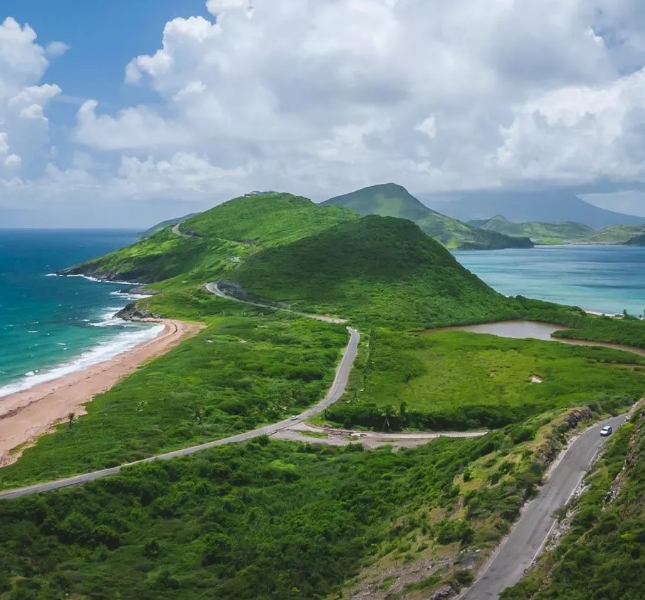 Land tax is collected based on the size, location and type of the land plot. For instance, the tax on cultivated land in Saint Kitts is USD 1.48 per acre, while the levy on uncultivated land is USD 0.37 per acre.

In Nevis, the tax is the same for any type of land plot – USD 0.37 per acre. In Special Economic Development Zones, such as the Southeast Peninsula in St Kitts, tax is collected at the rate of 0.5% from the land plot’s market valuation or the aggregate value of the land and the buildings and structures on it.

Tax on property sales, also known as Stamp Duty, amounts to 12% of the contract value of the property being sold.

House Tax (which does not apply to properties on the Southeast Peninsula in St Kitts) is collected from the Federation’s residents at 5% of gross rental value per annum, with a 25% compensation for properties lived in by the owner instead of rented to third parties. Minimum rent per annum is EC$ 600 for Saint Kitts and EC$ 48 for Nevis.

The laws of Saint Kitts and Nevis allow for individuals residing outside the country to hold a passport of the Federation. Section 3 (5) of the Saint Christopher and Nevis Citizenship Act, 1984, enables investors and their families to obtain economic citizenship (i.e. full
citizenship for life, including the right to settle on the islands, but without the right to vote and be elected).

The right to vote and be elected, according to the law, will only be gained by the economic citizen if they should actually relocate to the islands and reside there for two years.

Moreover, any descendants of economic citizens can pass on the citizenship to their children and grandchildren who are entitled to the citizenship by descent, i.e. without any additional investment.

In accordance with the law, the Federation is not obliged to notify and does not notify other countries via official political channels that citizens of the said countries had been granted the citizenship of Saint Kitts and Nevis. 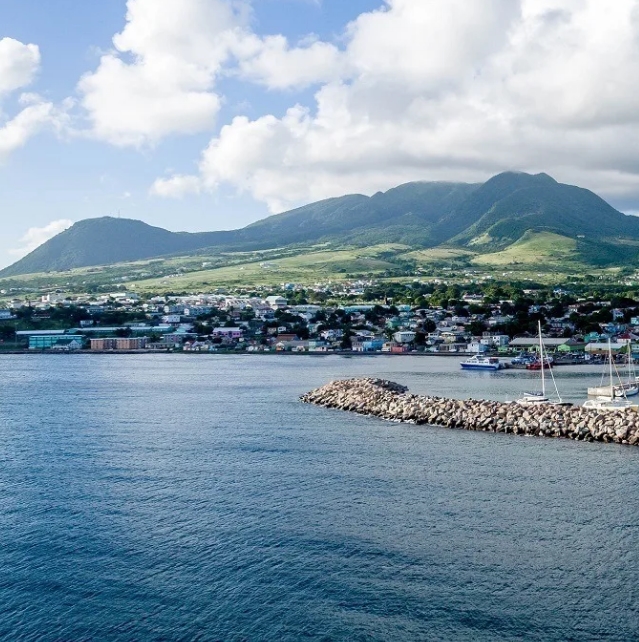 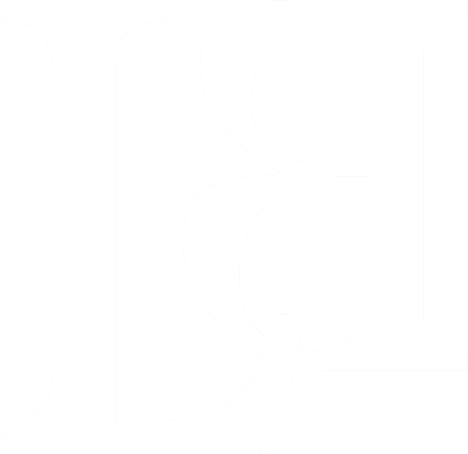 Your new passport, your new horizons…